First Hydrogen’s next generation of vehicles, which it plans to bring to market in the next few years 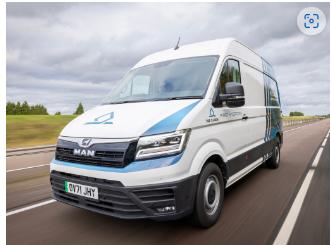 Revealed earlier this year and now in the final stages of development, the fuel cell vans have a 400-600km range (around 250 to 370 miles) – more than five times the capability than a battery equivalent. Their refuel time of around five minutes also dramatically trumps the c. five hours it takes to recharge a battery electric van.

The vans are being developed as part of the firm’s partnerships with Ballard Power Systems Inc and AVL Powertrain UK, based on MAN vans sourced from the Volkswagen Group brand.

The vehicles have now started performance tests at the Horiba Mira proving ground, located near Birmingham, UK, to confirm the safety and performance of the LCVs.

Last month, the vehicles were certified for UK road use ahead of a series of road trials with major UK operators, which will start in January 2023.

The vehicles have been created to encourage adoption and “whet the market appetite”.

First Hydrogen has said the programme will inform development for future vehicle trials in the EU, United States and Canada.

Feedback from operators trialling the vans – along with “high-level purchase commitments” – will then be used to shape the design and development of First Hydrogen’s next generation of vehicles, which it plans to bring to market in the next few years.

In parallel, First Hydrogen is also working to supply green hydrogen fuel and distribution through its Hydrogen-as-a-Service (HaaS) solution, which will further help the sector meet zero-emission targets.

Jeep is to launch a fully electric SUV in the UK from next year; the first of four all-electric SUVs planned for launch in North America and in Europe by 2025.