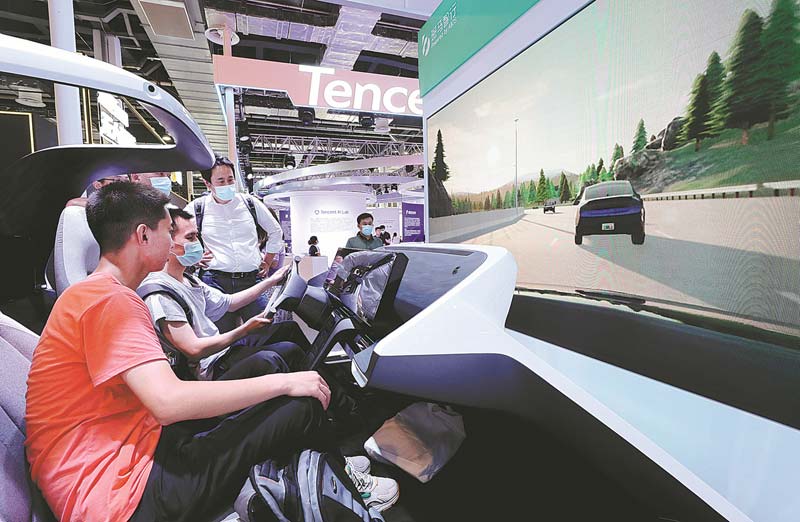 Visitors try out an intelligent cockpit at the 2021 World Artificial Intelligence Conference, held in July in Shanghai. [Photo/Xinhua]

Chinese carmakers are taking the lead in developing the intelligent cockpit, which is becoming a critical element of the modern driving experience.

Intelligent cockpits integrate smart technologies with multiple driving functions, such as voice recognition for vehicle commands and the entertainment and navigation systems.

According to a report released by patent research firm PatSnap last week, globally there have been 193,000 patent applications related to intelligent cockpits.

Of those, China owns 82,300 applications, accounting for 42.56 percent of the total and ranking first worldwide. It means that the country has become the most important market for intelligent cockpit technology, according to the report.

A representative from PatSnap said the three countries represent the development trend of the automobile industry to a certain extent as they are the three largest auto producers worldwide.

It can be seen that under the global trend of autonomous, connected, electric and shared vehicles, the intelligent cockpit has become one of the most important development directions of the future of mobility, the report said.

Patent applications pertaining to onboard infotainment systems alone have reached around 20,000 worldwide. Among them, China owns 6,542, ranking first among around 50 countries and regions.

According to ICV Tank, a market data analysis firm, the global automotive digital cockpit market was valued at $36.4 billion in 2019 and is expected to reach $46.1 billion by 2022. China, as the world's largest auto market, is estimated to reach 103 billion yuan ($16.13 billion) in terms of its intelligent cockpit sector by 2025.

The penetration rate of the intelligent cockpit configuration in China is about 48.8 percent, and is expected to exceed 75 percent by 2025. The figure is higher than the average level in the global market, ICV Tank data shows.

China's IT companies and carmakers are giving full play to their advantages in developing intelligent cockpit products.

The technology giant has said that it won't produce vehicles but instead provide digital car-oriented components for carmakers. It has set up partnerships with BAIC, Changan Auto and GAC Motors.

Smartphone maker Oppo is preparing to enter the auto market after launching its own smart cockpit solution Carlink last month.

Oppo said the solution is available for scooters and cars and it has so far more than 70 partners, covering carmakers, scooter makers, tier 1 suppliers and mobility service providers.

The company plans to install the solution in more than 15 million vehicles by 2022.

Another startup Xpeng launched the P5 sedan in September, which is equipped with its Xmart OS intelligent in-car system.

Discussion on the charging process of electric vehicle

The purchase of new energy vehicles in the Madrid area of Spain can be subsidized up to 9,000 euros